skip to main | skip to sidebar

In the Lonely Hour

Not much has been able to pull me out of the semi blog-tirement I've been experiencing.  However... 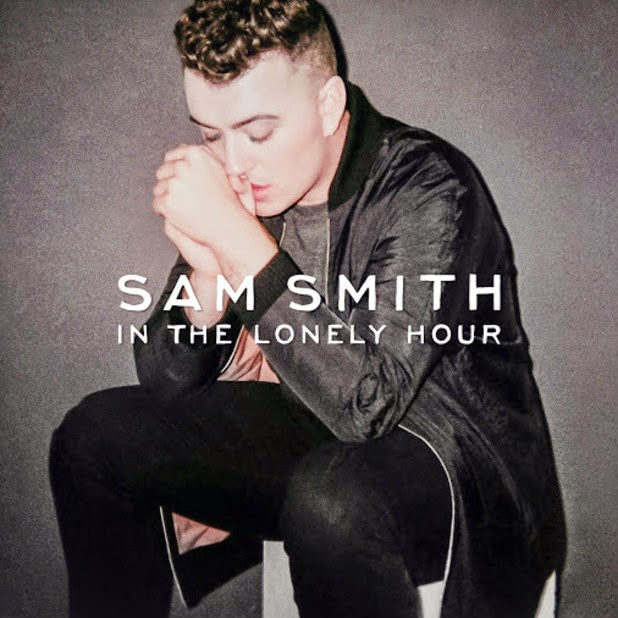 He's 22 and British.  And talented.  Like crazy talented.  He's being hailed as the next Adele, which is not a generous heaping of praise.  In my book, he's more than earned it.

A few months ago he was on SNL, and he blew me away.  He sang the gospel-tinged Stay With Me for one of his turns onstage and later posted a duet of this song with the incomparable Mary J. Blige.  It was several antsy weeks for me until his album In the Lonely Hour "dropped" last Tuesday.  I bought it.  And it is good.

His songs showcase an enviable vocal range, and although my favorites are the more stripped-down ballads (duh), his pop songs are fun without going Gaga.

Late last week he up and covered Whitney Houston's How Will I Know, slow-jam style.  And he nailed it.  So now it's official that I'm obsessed.  He has the chops and still seems very down-to-earth.  Oh, and he's coming to the Ryman in October!  Tickets: purchased.  Show: quickly sold out.  Tommy: elated.

I DO Want Some Scrubs 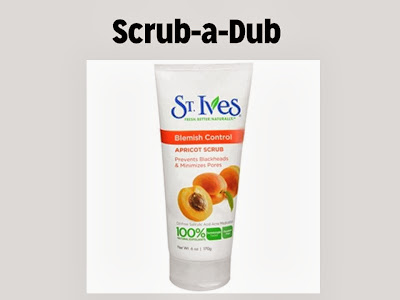 Y'all know that I love a face scrub.  Recently I picked up this one from St. Ives that has been on the market for a long time.  Actually, the original has been around a while, but this version is updated.  Now they've left out parabens.  Tah dah.

It is a bit gritty, but I like that.  Plus, you can't beat the price (around $4-$6, depending on where you buy it). It smells rather nice, too.  While I plan to stick with the Kiehl's, this one is a nice reinforcement--for my skin as well as my wallet.
Posted by Tommy at 3:44 PM No comments: 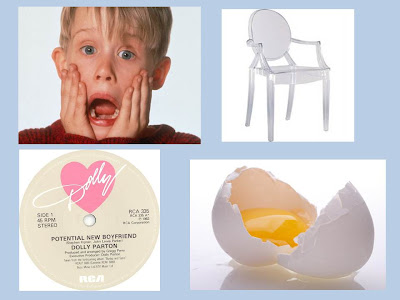 1. I am rather skilled at cracking eggs.  It's one of my hidden talents.  Nary a speck of shell escapes my watchful eyes or nimble fingers.  Egg whites only?  No problem.  Bring it.

2. If I find a song to be funny, then it gets added to this internal list of go-to, pick-me-up tunes.  In fact, it's my main criterion for non-ballad songs.  Favorites include "Potential New Boyfriend" by Dolly Parton, "Private Dancer" by Tina Turner, and "Stay With Me" by Rod Stewart.  Oh, and "Barracuda" by Heart.  The more dramatic, the better.

3. I hate Lucite furniture.  Hate.  I get it.  It's "modern" (sarcastic quotes) and doesn't take up visual space.  But it seems like such a dust and fingerprint magnet.  People tend to throw a damn Phillipe Starck Ghost Chair in a room and call it done.  My initial reaction is always this thought: Oh.  How clever!  I can't help it.  Then I think: You just spent $300 on a piece of molded plastic that's ugly as homemade sin.  Congrats!

4. I have a twin brother.  And in the ways that we're different, we're so different.  But I'm coming to realize that the older we get, the more we have in common.  Friends who have known us for many years now swear up and down that we have the same sense of humor.  That's hard for me to see, but sometimes it takes a third party to point out these things.

5. It's a rare day that I don't quote Home Alone, Clueless, or something from The Golden Girls.  Rare.  Like I often follow a food order with I'm not drivin', a la Kevin McCallister.   These are fine examples of entertainment media that I can count on to make me laugh, regardless how many times I've seen them or how accurately I can quote them.

Thank goodness that although I may be a bit late to the party, I didn't miss it entirely. 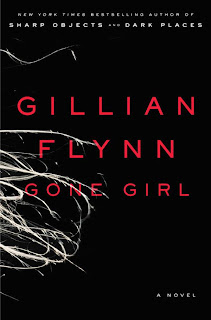 Honestly, it's hard to even begin to write about Gone Girl by Gillian Flynn.  Last weekend I absolutely ripped through it.  Like disregarded my regularly scheduled programming and library run, ironically enough.  Someone at work had warned me that this is not the type of book to casually read before drifting off to sleep.  Or over the course of a couple of weeks.

Check and check.  This book is intense.  Hmm....maybe that's not exactly the right word.  It's definitely a page-turner, but that seems too weak an adjective.  It's basically astounding.  How's that?

I read hundreds of pages at a clip.  It's a little over 400 total, in case you're wondering.  But it didn't seem like it at all.  This is the story of Amy and Nick, a young, married couple who has moved from posh New York City to small-town Missouri to care for his ailing parents.  Although they put on a good front, the pair's marriage is in ruins, and pretty early in the story, something disastrous happens.

This novel is organized like few others I've encountered, moving from his point of view to hers, and told through dialogue, diary entries, and teen-girl-magazine quizzes (just bear with it).  It's more than a mystery or a thriller, I think.  It seems to be a razor-sharp study into the lengths a person could go to really teach someone a lesson.  You just have to decide who that someone is in this book.

I'm not going to give away too much more, except to say that this is a must-read.  You'll be in for some memorable characters, twisted storylines, and even a few (dark) laughs.  As my friend Rachel would say--run, do not walk to get this book.

An example entry from Amy's diary (page 169) reads as follows:

I've got a calendar, and I put hearts on any day Nick seems to love me again, and black squares when he doesn't.  The past year was all black squares, pretty much.
Posted by Tommy at 5:34 PM 3 comments:

No, not the movie.  Although it's one of my favorites.  But the book--by Thom Filica.  I mentioned it whilst reviewing another of his books. 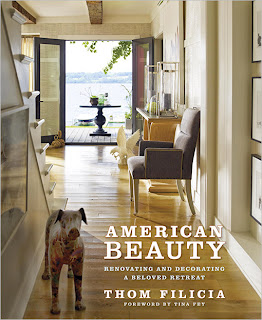 This one is a bit different because it's not a bunch of before-and-afters.  Instead, it's one big makeover of a classic but weathered house by the Finger Lakes.

After the first few sentences and photographs, I was hooked.  Hooked, I say.  And not just for the lake/fishing pun.  I tore through several chapters and followed along on the years-long journey that took Thom through refreshing this maison d'Americana.  (I just made that up.  It's not real French.)

Throughout the book and, of course, the house are several unifying elements.  Natural.  Nautical.  Local.  Decidedly unfussy.  If I had the resources, I would love to do a house very similar to this one.  Like that Thom, this one would put grasscloth on the walls and original hardwood on the floors.  I'd make symmetry a silent partner in my scheme.  The lighting would be thoughtful.  The powder room would be dramatic.  (There'd be a powder room.)  I'd hire awesome and native contractors and architects who could keep the original vision of the place.

Like before, though, Mr. Filica gets a little bit self-promotional.  Who knew he had partnerships with companies that offer lamps, floor coverings, furniture, fabric, artwork, curtain hardware...  By the end the text gets a bit repetitive, too.  After 200 pages, I remember that the planks are run that way to invoke the feeling of being in a boat.  I remember that the stone around the fireplace inspired materials in other rooms.  And so on.  But they're really great ideas.  And this book is definitely worth a browse.  Try to catch it before we're in full-on summer mode.  It's definitely a cooler-weather book.

Here's what Thom thought of the house while planning its design (from page 54):

I was reminded of the beautiful librarian who takes off her glasses and lets her hair out of the bun and suddenly she's a looker.  It's the same woman.  She's just revealing who she really was to begin with.
Posted by Tommy at 11:51 PM No comments:

Not So Fast, Alligator...

Has it really been over a year since my last ad post?  Le sigh.  That brings us to Lacoste. 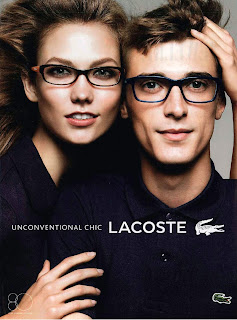 Obviously there's some specs appeal to be had here, but I took the time to tear out this page, scan it, e-mail it to myself, color-correct it in Pixlr (thanks, One Fine A!), and post it here...whew...because just look at that tag line. Unconventional chic.

What's so unconventional here?  It's a Caucasian man and woman wearing solid-color polos--that cost about a C-note each.  And they're sporting glasses (albeit super-cool ones) that are not really too hard to find.

Did I miss something?  Lacoste, are you being cheeky?
Posted by Tommy at 8:04 PM 1 comment:

I spend a fair amount of time in my kitchen, especially on the weekends, when I tend to bake up some treats.  Through the week the microwave gets in on most of the culinary action.  It's always nice to take the time to tidy up the workhorse of the home, though. 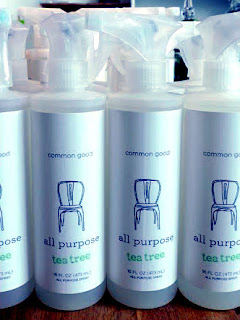 On the daily I use tea tree all purpose spray cleaner from Common Good because it's eco-friendly and smells nice.  Usually it takes just a few sprays, which sit for 3-4 minutes, and then a quick swipe of a towel.  Ketchup dots, rogue powdered sugar, and toasty crumbs are drawn in like magnetism. 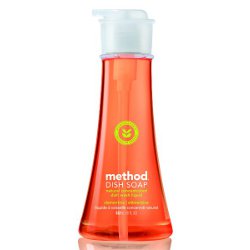 For the pots and pans, which I don't trust to the dishwasher, I use method's clementine-scented dish soap to get the job done.  Grease is no match for this stuff. 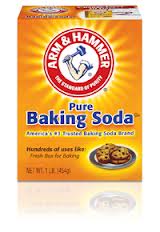 If I need just a teensy bit of abrasion on a cookie sheet or roasting pan, I turn to the power of baking soda.  It's super cheap and green.  (In fact, I just use boxes from my baking cabinet that are not so fresh any longer.)  Drip a bit of warm water on the surface of the dish, sprinkle generously with baking soda, and rub with your fingers.  Tah dah!

You can also use baking soda to clean the sink, faucet, and stovetop.  A quick lap with the vacuum, and I'm done!

Tommy
I'm a Southern guy who wears glasses and tries to find the humor and style in life. My blog is just a grab bag of that life as I see it.